How to use a DirectInput controller with Megaman X: Eclipse

Eclipse has built-in support for Xinput controllers, however it does not support DirectInput. It simply wouldn't work well if I tried to integrate it into Eclipse itself (based on how GameMaker handles it) but there is still a way to use that controller with a program called Joy2Key.

It's a fairly simple program to use. Open it up and click on "Auto Setting Wizard" and then press the key you want to map to. Eclipse will have to be set to the keyboard setting for it to work. Once you're all done just minimize the program and you're good to go!

I do intend on trying to add DirectInput support in the future, but I won't keep it unless it works flawlessly. I'm doing some brainstorming to see what methods I could try. In the meantime, Joy2Key works great.
Posted by Eclipse at 15:22 20 comments:

If you're getting a "D3DXCompile failed - result" error upon shooting the first enemy, this should help you fix it.

Go to http://www.microsoft.com/en-gb/download/details.aspx?id=35 and simply download and run it. It'll update your DirectX to the latest version.

It's also possible that your graphics card doesn't support shaders. No worries, though. The next update will run a check to see if you can run shaders, and if not, it won't use them. You just might miss out on some neat effects, but the game will be playable.
Posted by Eclipse at 21:43 No comments: It's here! The demo has finally been completed and you are now able to download it for Windows. The OUYA version is being worked on. I'll give an update on that later.

You will be able to play Scorch Raptor's stage. It's very challenging and it will be the longest level in Eclipse, so we're giving you 5 lives and a subtank to start you off. We're considering making an "easy mode" later on, but that's not a priority at the moment.

You will be able to dash, air dash and up dash; however X will not have any upgraded armor equipped. We want to keep the armor design a "surprise" for the full release.

The stage select screen design and some of the music is temporary. We were unable to finalize some of the songs we planned to use, but once we do we'll provide an update.

We also want to give Josh Shelton a HUGE thank you for joining our team and his endless contributions. He designed and animated Scorch Raptor and has done a significant amount of sprite work for us. This demo couldn't have happened without him! I encourage you to check out his deviantart page, he's got some unreal talent.

BarylTDF did the original Scorch Raptor stance sprite, and Yllisos Zanon refined it. Big thanks to you guys as well!

You can download v1.00 here or from the sidebar on the right. (If you get a D3DX error, read this: http://mmxeclipse.blogspot.ca/2013/08/error-upon-shooting-enemy.html)

The default controls are -

We also support Xinput controllers. These (except fullscreen) can be modified in the option mode.

I should note that recently GameMaker: Studio had a bug that ruined the .exe's created from it, causing many, many glitches. It worked fine on my computer except for 1 small bug, but was completely broken on others. I have downgraded to an earlier build and it worked as it should for me, so let's hope it also does on your computer! If you have any errors or bug repots, be sure to let me know in the comment section. Eventually I'd like to set up a proper bug report system, but not right now.
Posted by Eclipse at 16:28 5 comments:

The demo is very, very close to release. All the tiles have been laid out and the level events have been coded. It's just a matter of doing some final bug testing and a bit of fine tuning.

We're primarily focusing on the Windows version right now. After it's out, we will get started on the OUYA version. However, we won't be putting it out on the OUYA market, so you will have to download and sideload the .apk file from us.

After the Windows & OUYA versions are out, we'll start looking at bringing Eclipse onto other platforms (Ubuntu and HTML5 are at the top of that list).
Posted by Eclipse at 03:08 3 comments:

Got my OUYA in the mail today and decided to test out MMX Eclipse on it. Still need to do some optimization but so far it works like a charm! 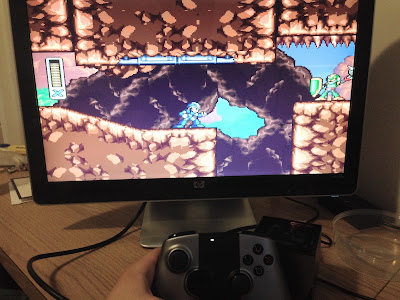